The therapy dogs and their handlers are a welcome distraction from illness or pain by bringing laughter and encouragement to everyone they meet. It’s always a joy to see one of our dogs providing comfort and bringing smiles to patients, their families and our staff when it’s needed most. 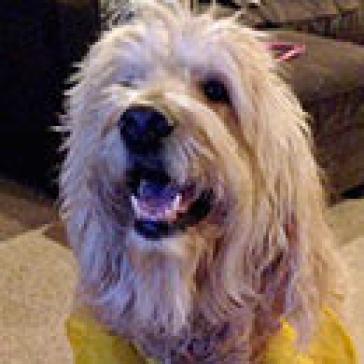 Looking at Toby now you’d never know he was a sickly puppy. Ten years ago, Toby’s owner, Randi Leeson, took him home from a pet store. When she brought him home Randi discovered Toby was very sick.

“Even though he didn’t come from a shelter, I still think we rescued him,” said Randi.

Over the next weeks Randi nursed him back to health. Once healthy, this Golden Doodle’s true personality came out—a bundle of love, enthusiasm, and loyalty. Randi soon began looking for outlets for Toby to use his tender heart for healing. When a friend connected her with Avista’s Dog Therapy program, she knew it was a perfect fit.

“His personality is perfect for this job. He loves people and is so affectionate and calm,” says Randi.

Upon meeting Toby for the first time, you’ll understand exactly what Randi’s talking about. The healing and calming power of his presence is unmistakable. One of Randi’s favorite encounters with Toby was with a little girl in the Emergency Department. This young girl was very upset, crying, and was refusing food and help from hospital staff. Toby knew exactly what she needed. He hopped on the bed next to her and looked right into her eyes. The little girl threw her arms around Toby and sobbed while Toby snuggled and licked her face. Before long, she calmed down, began talking, and asking for food.

This is why Randi and her furry friend love their jobs—though they don’t think of it as work. Toby and Randi love interacting with staff, visitors and patients each time they visit. He’s especially delighted when he receives treats or back rubs for which he will repay with a sloppy kiss.

When Toby isn’t working, his favorite things to do include long walks, going to the dog park, playing with his little sister, and chasing tennis balls for hours on end. 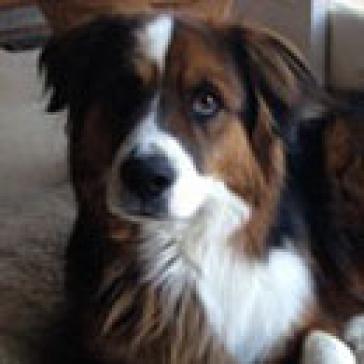 The Tale of a Loveable Dog with a Double-Spiral Tail

If Badger could talk, he would tell you that he enjoys being in the moment and brightening someone’s day. That’s exactly what the huge bundle of fur has been doing at Avista for over a year. The four-year-old Bernese Mountain Dog and Chow Mix has a combination of cute, cuddly, size and colors that allow him to make quick work of people’s hearts.

When he was just six-weeks-old, Badger was rescued from a kill shelter in Salina, KS. His handler, Bill Adkins transported him from Kansas and agreed to provide foster care. Within a week, it was clear that Badger wasn’t going anywhere; he had already found his forever home with the Adkins and their two coonhounds.

“I saw the effect therapy dogs have on the morale of patients when my mom was visited by one when she hospitalized in Florida. My wife also had the benefits of one during her recovery from a traumatic brain injury a few years ago,” explained Bill. “When I realized one of our dogs would be ideal for the mission, it was a no-brainer.”

Badger loves his work, the attention and having a job that helps others. When Badger first started coming to the hospital, he wasn’t quite sure what was expected of him. When he realized it was to “be” and let others give him some attention for a moment, he was all-in.

Badger has been a part of several healing encounters, but a particular moment that stands out occurred in the Intensive Care Unit where a woman was visiting her father. She saw Bill and Badger walk in and asked Bill if he could bring Badger in to visit. “Her father did not speak English and further, he was blind. We brought badger over to the side of the bed (she told him what we were doing in Spanish), and reached his hand out to pet Badger.” Bill continues, “You have to understand that Badger is impossibly soft to pet. The look on this gentleman’s face as he pet Badger - the smile, laugh and exclamation of that moment has stayed with me a long time.”

Badger spends his free time with his siblings. They’ve “taught” him to be a good squirrel chaser. He’s also very fond of his accrued toy collection and likes nothing more than a few rounds of tug-o-war throughout the day. 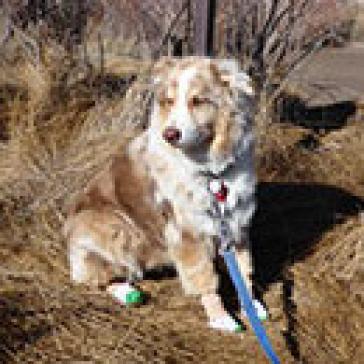 A Shepherd That Keeps Watch over Avista’s Flock

It’s often been said that an “Aussie needs a job to do.” Whether or not that’s true, Sidney, a pure bred Australian Shepherd Red Merle, has a job she definitely wants to do. Known as a working dog with strong herding and guardian instincts, many Aussies make their mark herding livestock. However, Sidney found her calling watching over a different kind of flock.

Sidney and her handler Jenny Kapela have been a team at Avista for a year and a half. The 10-year-old dog has been a healing force for much longer that though. Jenny describes how she first realized Sidney had a therapeutic future, “My best friend is a mechanical contractor and his body is worn and broken and he hurts - a lot. When he would see Sidney at the end of a work day, or if they were dog sitting, he would get down on the floor with her and I could just feel/see his pain subside.”

Jenny searched on the internet and found Avista’s pet therapy program. When she applied, she was told there would be a two year wait. Fortunately, a slot opened up in less than eight months. In the beginning, Jenny questioned how Sidney was going to know what to do? It turns out, she didn’t need to worry, Sidney – so calm and attentive - was a natural.

Since then, Sidney has been distracting patients and associates with her baby face. She’s a fan of the free massages and treats at Heather’s desk in Imaging, but mostly, she likes making a difference.

“We were visiting in the ER with a young woman who had just given birth to her second child. She was going through postpartum depression and was very sad,” explains Jenny. “She asked if she could hold Sydney. It was amazing to see the change in this woman, both tangible and intangible. I’ll never forget it.”

Sidney’s work comes from the heart, but that’s not to say she doesn’t appreciate a full belly in exchange. She loves her treats and expects one for doing everything.

When she’s not on shift, Sidney enjoys hiking, playing Frisbee and road trips with her mom. She’s also a fan of the hose game at Camp Stockwell.