It’s not every day that Centura - Littleton Adventist Hospital is asked to host a wedding, let alone in the ICU. But Jessica Abeyta told us she’d always wanted her grandfather, Sal, to give her away. He played a major role in her life, especially while she was growing up, and she’d always imagined him walking her down the aisle at her wedding.

As she prepared to marry the love of her life, Steven, however, she realized her grandfather might not be there to see the nuptials. Sal was not doing well while in a coma in the ICU and wouldn’t be able to make it to a traditional wedding.

Knowing Sal was not expected to live much longer, Jessica made an unusual request: she asked Littleton’s lead chaplain, Dany Hernandez, if she could get married in Sal’s room in the ICU, with a limited group of family and friends along for the occasion.

“I’ve never been asked to perform a hospital wedding,” Dany said, “Let alone in the ICU! But we wanted to do all we could to make it happen.”

Sal’s care team worked with Dany to organize a brief wedding that would allow Sal to be present while protecting the privacy of other patients nearby. Once they were sure it would work logistically, they agreed the big day could move forward. 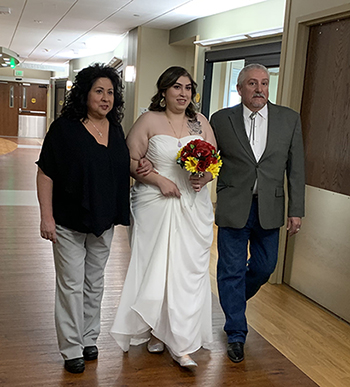 On a sunny Saturday in February 2020, Jessica arrived in a beautiful gown and Steven in a black suit. A couple dozen family and friends showed up as well. In a ceremony both beautiful and bittersweet, Jessica married Steven surrounded by loved ones, including her grandfather Sal. Dany officiated the ceremony just a few feet from Sal’s bed while the couple and close family donned scrubs.

Sal passed away the next day, but not before he was able to take part in the biggest moment of Jessica’s life. Littleton Adventist Hospital was honored to be a part of this very special and unusual occasion. It was a great example of the whole person care that patients and their families can expect.

The day after the wedding, and with the couple’s permission, the hospital posted Jessica and Steven’s story on social media and received thousands of “likes”, shares and comments, including dozens of well wishes and words of encouragement.