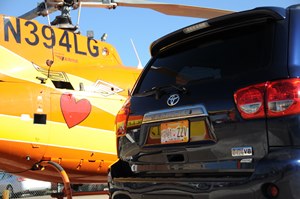 "I've always been proud to be affiliated with a charitable organization. I'm happy to know that there are still benevolent people among us. I am humbled when I think of the number of lives that Flight For Life Colorado has had a hand in changing. I feel unworthy of unsolicited praise from strangers who say "You're the guy who saved my...(son, wife, etc.)" Flight For Life Colorado has such a wonderful mission, that I am often thinking of ways to let others know of how important that mission really is, and give something back to the program that has allowed me to also share in its goodness.

License plates. Probably not the first thing that comes to mind. In late 2009, it came to mine. I thought, "Why not?" "There are several different plates for a number of organizations." A few phone calls to the Colorado Department of Revenue, and soon I had a hand full of literature that I forwarded to my Director. At that point, I was out of the loop so to speak. Things seemed to progress, three thousand signatures were obtained, some legislative work was done, and here we are! Kathy Mayer has to be credited for doing the legwork. The idea for the plates was not unique to me. Others had come up with the idea earlier, unbeknownst to me, but it had never seemed to have taken off. I can't and won't accept credit for anything other than that.

The thought of a single motorist stuck in traffic behind my vehicle with Flight For Life plates, who ponders for a moment about the importance of our program and opens their heart to its significance, was well worth my twenty five dollar donation. My sincerest hope is that he or she will then pass it along." - Eric Sorensen, Flight For Life Colorado Crew Member

Learn more about how to make your donation and get your plates.