The awards are administered and managed by the Colorado Nurses Foundation with regional outreach and regional selection provided by local Area Health Education Centers and independent Nightingale committees. They are awarded to individuals who exemplify the spirit of nursing through advocacy, innovation and leadership.

The Nightingale Awards, given since 1985, are Colorado’s highest nursing honor. Nurses who fall into the following roles are recognized: Nurses in Clinical Practice, Administrators, Educators, Researchers, Non-Traditional Practice Roles (any other RN).

Since childhood, Burton knew that she was made to be a nurse. After having four daughters, she completed her Associate's degree in Nursing in 2015 at Pueblo Community College (PCC).

Following earning her degree, she quickly began work at a nursing home before joining the Med/Surg Unit at St. Thomas More in 2016.

Since that time, Burton has earned her Bachelor of Science in Nursing degree from Grand Canyon University and has enjoyed working as a clinical instructor at PCC in addition to her role at St. Thomas More. 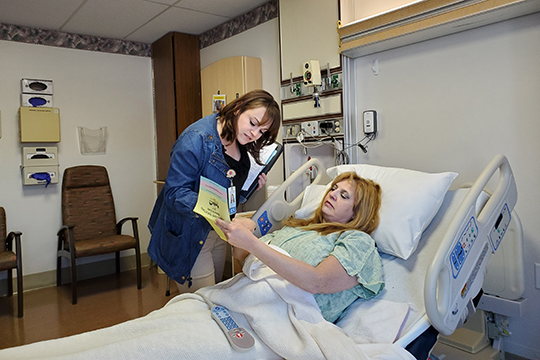 For the past two years, she has had the honor of working as a case manager.

“It was in this position that I began to see signs of human trafficking from my patients during interviews,” Burton explained. “To that end, I began doing extensive research to understand the issue. I have become committed to identifying patients who are trafficked.”

“It is my goal to offer resources and hope to these individuals in the clinical setting and to spread awareness of this critical issue within my community,” Burton added.